Today dawned dreich and dismal, a stark contrast to the frosted glory of yesterday. The boys went back to school amid sunshine and breath, and while they were leaving I spotted this rose, one of the last of the season. The icy crystals clinging to the leaves and petals would be the ruin of it, but what a beautiful way to go. 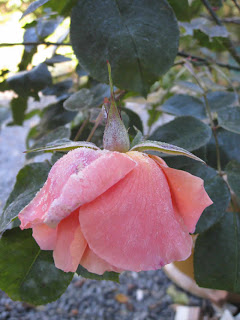 I have a bit of a love/hate relationship with roses. There is an early memory of bending to inhale the fragrance of a full blown cabbage rose, so heavy that it had begun to trail on the ground, only to be confronted with a wicked looking earwig *shudder* How could anything so alluring harbour something so menacing? I didn't encounter cultivated cut flowers until much later in life so developed a habit of shaking the heads of all that came in to the house to dislodge any unwelcome visitors. No, it doesn't do much for the rose but I can't begin to tell you what it does for my peace of mind.
Many youthful Summer months were spent with friends trying to distill the rose's heady scent. Soft, silky petals were mercilessly jammed into jars filled with water and pounded with whatever came to hand in an attempt to encourage them to release their coveted aroma. Unfortunately the results were more often than not a brown, foul smelling sludge that did little to enamour me. Where was Patrick Suskind when I needed him?
Their fragile grace and sweet smell were to elude me until I let nature take its course and allowed roses free reign in my own garden. But even that was not without it's pitfalls. While I would be able to appreciate their delicate beauty unfurling on a daily basis I would also have to participate in a routine of dead-heading, pruning, spraying and the inevitable blood spilling. What price to pay for perfume!


So now I content myself with rambling roses. They require little attention but reward me with a stunning summer display and release their subtle fragrance on the evening breeze (they also make a great security hedge!). For the rest of the year I settle for rose inspired  brooches, made from whatever comes to hand, stored in boxes scented with rose oil. Not a patch on the real thing I know, but it keeps me going until next year.

I have one very sad rose in my garden. We brought it up from the south when we moved and it's never quite forgiven us.

The brooches are lovely.

What pretty roses. And your rambling roses sound beautiful. We had an earwig in an apple incident recently... Bleurgh.

Eryl
I tried to transplant a rose from the old garden just 3 miles up the valley but I'm afraid it didn't take. It struggled for 3 years before giving up.I wish now that I had left it where it was for the new owners to enjoy but it was one of my favourites and I wanted it with me. I'm sure there's a metaphor in there but I'll let the experienced writer tackle that : )

VeryBerry
I think earwigs have to be my least favourite bug, probably something to do with all of those stories I was told when I was young about how they get in your ear and eat your brain. That's what I get for being the youngest in the family : )