After yesterday's craft fayre at Dumfries show I had hoped for a bit of a long lie this morning. The preparations the week before hand and the activity of the day had left me tired and washed out. Unfortunately it wasn't to be. My trusty canine companion woke me up, not in a cute and cuddly kind of way that many dog owners often enjoy ( the wet nose nuzzling your face or the playful tugging off of the bed covers are a couple I've been told) No I'm afraid it was the noise of Deefer having an epileptic seizure that woke me up.
He was diagnosed as having epilepsy 2 years ago when he was just 5 years old. At that time I was completely unaware that dogs could suffer from this condition. Now of course every dog owner I talk to has a story of some dog connected to them ( theirs, a relatives, a friend's, a friend of a friends, the second cousin of the wife of the brother of the woman who lives at the bottom of the next street!) that has/had epilepsy.
The seizures were initially very infrequent, no point putting him on medication the vet said, we would have no way of knowing if it was being effective. This year however, they became much more frequent and severe, often 3 - 4 seizures in the space of 36 hours, so he is now being treated. While it has taken a few months to get the dose to a therapeutic level (praise be to plastic cheese for the help in the administering of medication) he is now much more stable and the seizures are decreasing. 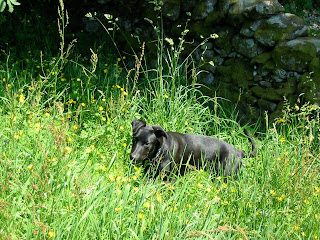 Is it possible to feel proud of your dog? I think it must be because I'm sure that's how I feel every time I take him to the vet's to get blood samples taken. He goes in without a fuss then promptly lies on the floor, paws outstretched, never flinching at the nip of the needle, quietly looking around as if to say "and the biscuits would be where exactly?" He has always been like that, a quiet, gentle soul, wanting nothing more than your company (but if you have a tasty treat on you as well all the better!)It's thankful we didn't want him as a guard dog, the wagging tail that greets every delivery man is a bit of a giveaway.
I was brought up with dogs in the house  so it was a natural assumption on my part that my children would be too. In the end that took a bit more persuasion than I had anticipated as my husband had never had a dog and wasn't sure he wanted to break that particular habit. He eventually capitulated ( did you ever doubt it! ) and a trip to the pound was made. Deefer and his brother had been abandoned on the street when they were about 8 weeks old but had fortunately been picked up by the SSPCA. He came home with us a week later.
He will be the last dog I ever have. He is so good in so many ways that it would be impossible to replace him, and unfair on any that came after as the inevitable comparisons would always be made. Having never had a dog before my husband has little appreciation of how easy Deefer has made it for him to be a dog owner.
Deef is lying at my feet as I type this, one of his favourite spots ( he also likes to stay close after one of his episodes)  Hopefully he will be there for many more years to come. So I missed a few extra hours sleep this morning, big deal. He needed me this morning, small payment for the innumerable times that his quiet company and unquestioning loyalty have helped me. Besides who could turn away from a face like this?