And so to bed

I love jigsaws ! ( the puzzles not the power tool) 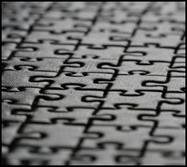 Unfortunately for me my family do not share my enthusiasm. In fact I'd go so far as to say they treat it with a certain level of contempt, seeing the entire pursuit as a pointless waste of time. Why on earth would anyone cut up a picture just to put it back together again?

To avoid facing the inevitable ridicule I have learned to subdue my passion. It's lying dormant, waiting hopefully for those twilight years when I'll wear purple, rattle railings and fit oddly shaped pieces of cardboard together until my little heart's content.

However, in the meantime I have discovered a productive outlet for my obsession. One that no one can complain about since they invariably reap the benefits. The gaping hole left by my unfulfilled desire for jigsaw puzzles has been occupied by ......Flat Pack Furniture!

It's quite sad really when I think about the sheer pleasure and sense of accomplishment I get when I've put something together. When I say 'I' I mean just that . In the interests of marital harmony flat pack furniture building is a solitary pastime ( the instructions always seem pretty clear to me! )

This is my latest contribution, a single mid sleeper with under bed and overhead storage. 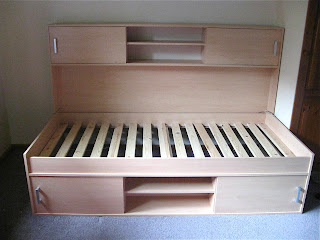 It replaces a high sleeper cabin bed, one of two I built a few years ago. They had a wardrobe, drawers, desk and shelves underneath with a bookcase at the side and seemed like a good idea at the time. Space saving, practical, and they took two days each to assemble. Bliss!

What I had failed to take in to consideration was the passage of time. Time that would see the boys undergo a growth spurt and me suffer a loss of desire or ability to climb up a ladder to change the beds. They started bumping their heads on the ceiling while getting in to bed. And me? Who knew putting a fitted sheet on a mattress while perched on a step 4 feet above the carpet could be so exhausting?

I know what you're thinking. Why didn't I just let the boys change their own beds? Or the sheets at least! I tried. Honestly I did, but have you any idea the mess two teenage boys, who would much rather be playing their X Box than scrambling about on a mattress, can make of putting on a sheet? I mean, for goodness sake, there aren't even any corners to tuck in! It was more than I could bear. They had to go - the beds, not the boys.

So far I've managed to persuade son no.1 to go for a change, hence the new addition. Son no.2 is being slightly more stubborn. A good thing I suppose, this way I can look forward to piecing together more furniture at a later date. Well a girl has to get her fix somehow!

Ooh I love jigsaws too. I think it's about everything having it's place. Great furniture building!!!

Sorry, but I don't particularly like jigsaws or flat packed furniture making. Hubby does any furniture assembly we require and, surprisingly, he reads instructions. Well done on doing it yourself though, it looks like you had all the pieces! :-)
Teresa x

Thanks Emma. You could have a point about everything in its place being the attraction.

Hi Teresa, jigsaws might be a bit like marmite, you love them or hate them. I was quite ill when I was younger and they were one of the ways for me to pass the time during endless days in bed, so I guess I have a soft spot for them.