While the sun shines

I know it had been forecast but it was still a pleasant surprise to open the door this morning to such a glorious day. I was sure Autumn would descend with the same false promise as Summer had.


With the sun on my face I set out with every intention of getting some work done, but on my way to the work room I was stopped in my tracks by this rather handsome devil.

WARNING: if you have a fear of spiders look away now 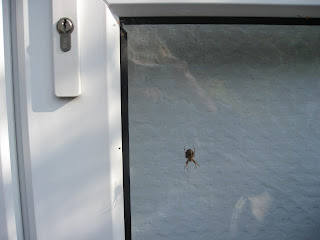 Not being an entomologist I have no idea what sex or type of spider it is, I just called him ( or her) 'Big'. I watched him ( or her ) for a while as he sat waiting for something tasty to drop by. The temperature began to rise, a soft breeze ruffled the turning leaves and I thought to myself it would be such a waste to be shut up in my workroom on what was probably going to be one of the last good days of the year.


Instead I went back to the house , collected some gloves and a pair of secateurs , and spent a very enjoyable morning doing some outdoor housework ( or gardening if you prefer ). When we bought the house 6 years ago I inherited a rather large herbaceous border that always needs cut back at the end of the season. The last few years I've left it too late and the rain and sudden frosts have landed me with an unappealing brown mush to deal with.It wasn't going to happen this year. During my tidy up session I came across a number of others that were busy making the most of the last minute sunshine 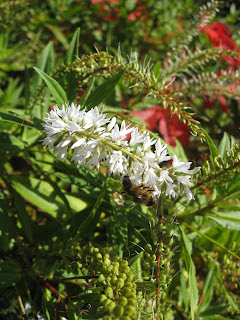 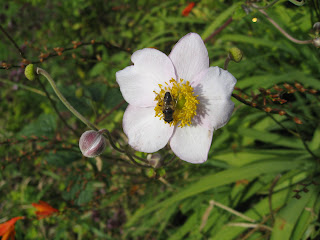 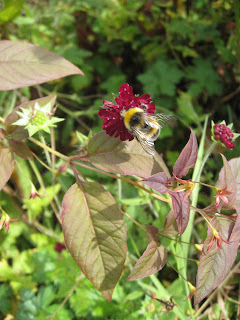 These bees were collecting pollen from the few flowers that escaped my flailing shears. When armed, I show no mercy! 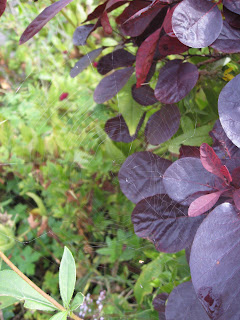 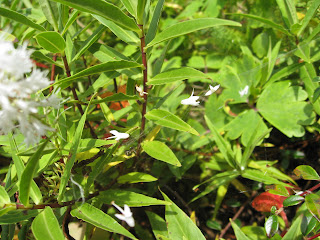 Evidence of more spiders could be found. Unfortunately as the day wore on and the dew evaporated the intricate webs became almost invisible, great for a spider trying to be inconspicuous, not so good for a very poor photographer.


There has been a lot going on these last few weeks, filling my head with one quandary or another. Today was more than a bonus weather wise. It was also a chance to remind myself to stop and take the time to appreciate what I have around me instead of constantly seeking the elusive 'more'.

Just remind me, looking at your photos, it is October tomorrow isn't it? I love your spider, we have a 'blonde' version of one of those in our conservatory. We call her ''our albino spider' and she's kind of a pet, in so far as we've not disturbed her as she's well out of the way and catches stinky flies. The children are fascinated by her, I think it's good for them to have a 'health respect' for spiders rather than freak out when any spider comes along.

I think your spider's twin was spinning his web on my car this morning! I keep seeing new webs most days...they blow away as I drive..and today I was treated to a sight of their creator...like yours he was rather bulbous bodied! Not sure where he hangs out after spinning...must be in a tiny nook or cranny in the bodywork! Unfortunately our lad doesn't share the fascinations of the minibeast world!
Hope your unwanted stray has upped and left and your quandaries are fewer or resolving...good to divert and embrace the natural things in life every now and then.
Ali xx

Sorry Jane, no more spiders I promise. Or at least if there are gong to be any more I'll give you a heads up.

Yes Emma, the garden is still gloriously green. We had visitors from Canada stay in August and they couldn't get over how lush everything was. I did point out that there had to be at least one upside to all of our rain.

Thanks for the good wishes Ali. My stray left rather quickly, chased by the marmite no doubt. Check your wing mirrors, that's where arachnids normally reside in my car. They don't like it when I adjust them :o)