The exuberance of youth

Sometimes I'm convinced I've aged in dog years. I don't exactly feel old, and in my head I've not changed for the last twenty years. It's just that every now and then I find myself saying or thinking things that have no right being said or thought by someone my age. By my mother, most definitely, but not by me.
I blame the children! Until they arrived I hadn't really paid much attention to time passing, only milestones like driving, voting and graduating being of note. My boys however provide a daily, tangible reminder of the years that are galloping by. For a time they kept me young. Caring for them in their formative years helped me remain physically and mentally active (twins understand very early on the concept of divide and conquer!)
I could ascend a climbing frame or tree with the best of them. I thought nothing of scrambling over craggy terrain to get to the most interesting rock pool, spending the next half hour or so up to my elbows in frigid sea water as we tried to identify the inhabitants. 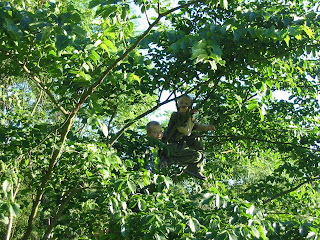 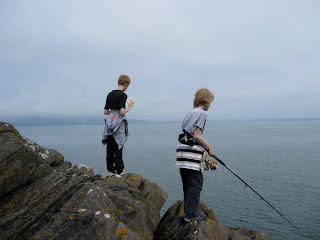 All done while keeping watch over them, protecting them and all the while getting the opportunity to see everything again through their eyes.
Now in their teens I, quite rightly, have taken a back seat in their escapades. They are stepping out on their own. That's as it should be. But subsequently it would seem that from this position I'm no longer party to their 'joie de vivre' , and that's what makes me feel old. No longer buoyed by their high spirits and air of discovery, I worry! Out of sight isn't out of mind. On the contrary, out of sight means a mind full of horrific possibilities. Every one of my concerns leads to yet another wrinkle, another furrow in the brow, another year that feels like seven.
This weekend I was informed of a camping trip they were planning along with four of their friends. Their excitement at the proposed outing was almost palpable. I, on the other hand wasn't quite so enthusiastic. I slipped in to overly cautious mother mode and bombarded them with questions, pitfalls and 'so help me' warnings.
"Who are you going with?", "Where are you camping?", "Who owns the ground?"
"It's raining, you'll get wet", "It's midge central out there, you'll be eaten alive", " You can't have a camp fire, there's no dry wood. How will you stay warm?"
"There had better be no cigarettes/drink involved or so help me.....!", "What? Some of your friends are girls? There had better be no nonsense or so help me.....!"
You get the picture.
I began to feel like an old biddy, my maternal caution making me sound like a killjoy. Fortunately the exuberance of youth prevailed. To put my mind at ease they camped in the garden (actually I'm not sure if I gave them much choice but the access to a toilet seemed to sway them) As the six of them started to unpack the tent I hovered anxiously at the back door, waiting to step in and take charge. My help wasn't required! They were carried along on a tide of good natured co-operation and in between laughing, spraying jungle formula on each other, and getting damp in the ever present drizzle, that none of them seemed to notice, the tent was erected.
That evening there was the occasional foray in to the kitchen for treats and hot chocolate. I have a feeling that was more an effort on their part to let me know they were okay than an actual need for sustenance. Their subtle attempt at saying, 'we're fine, we'll manage, you don't have to worry so much'. When did my boys start taking care of me?
As I sat watching the flickering lights of their citronella candles and wind up torches I wondered if there will ever be a time when I won't worry. A time when I can just let them go and enjoy themselves. A time when this age I'm feeling provides me with the attending wisdom, and the ability to relax. 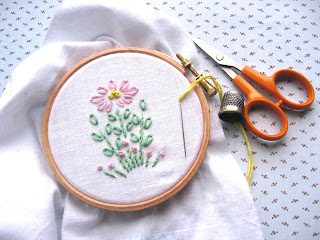 So what did I do as I sat pondering time, age and wisdom? I took up my embroidery! It seemed appropriate somehow. There was however no rocking chair involved, I'm only willing to take the image so far :o)

I think and have heard from other Mums that you never stop worrying about our children! I would have been the same about the camping adventure as well. Cross stitch will be a great calming influence! ( I have a rocking chair already!) Bx

Oh man, you made me well up! My three are 4, 6 and 8 - teenage years seem so far away! The thought of them out in the world worries me silly so I dismiss it quickly. Thanks for sharing, it reminds me to enjoy these precious few years when I still have a little control!!! E x

Being a mum is just one worry after another from checking the contents of their nappies onwards! I can't imagine that ever going away - the bond between mother and child is too great.
My girls are 11 and 13, and I'm now worrying about all kinds of teenagey things.
You are not alone!!
Kate x

I love the way you think...I'm on the same wavelength.... (and some days I think I have turned into my mother)! My son is a few years off camping...but I can completely identify with your actions, comments and feelings!
Love the fact you found solace in your embroidery!
Ali x