I have mixed feelings when it comes to cooking. At times I approach it with a Disneyesque joy (although for environmental health reasons I keep the animals involvement to a minimum) Occasionally its with a degree of apprehension. Most often than not it's with a sense of apathy.
I'm not the most co-ordinated of people, which is probably why as a child my presence in the kitchen was not necessarily viewed with a great deal of enthusiasm. My duties were limited to setting the table and drying the dishes (As anyone with siblings knows there is a hierarchy to doing dishes, the elder washes, the younger dries. Being the youngest of 4 girls it was inevitable I would always be stuck with the drying!)
So before going off to college I had to a acquire a certain degree of culinary know how. A 'crash' course, and yes I do mean that literally, at my mothers side armed me with recipes designed to make the smallest amount of food stretch the furthest. Not so much recipes, more vague instructions as to what to use and in which quantity to use them. Nothing was ever written down. My diet during those four years was 'interesting' shall we say. However since most students aren't too choosy when it comes to a free meal it also saw my introduction to the pleasures of entertaining round the dinner table.
All of this was to change when I got married and had my boys, and I'll be honest, I did panic a bit. I had managed to survive on my meagre offerings but I didn't think my family could. Fortunately a very good friend's mother was my salvation. As an engagement present she gave me my first, and best, recipe book. 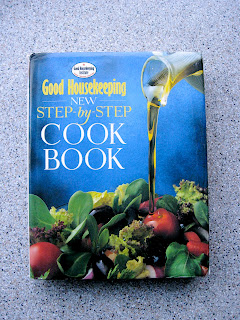 The second lifesaver came when my health visitor recommended this book to me. She must have sensed my unease at the prospect of weaning twins. When I say unease I mean terror, the  'rabbit in the headlights' kind. 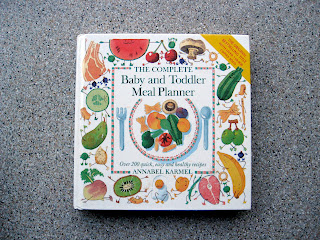 So I discovered the joys of planned cooking, of following a recipe in the knowledge that if it was a dish that met with approval I would be able to reproduce it at a later date. Dinner parties became less tentative even as the attendees became a bit more discerning. The bookshelf became fuller, the dishes more adventurous and I more confident in the kitchen.
It was all going well .... until drudgery set in.
Cooking something new every day, being limited by the family's likes and dislikes, planning the weekly shop to give me as many options as possible..... boring. Add to the mixture the fact that every now and again I have a Captain Kitchen moment when, like any super hero worth their salt, my super powers come in to play. As Captain Kitchen I have the ability to burn water, turn pasta or rice into a pot shaped building brick and supply the school hockey team with indestructible muffin shaped pucks.
In an attempt to alleviate the tedium I have gone back to my early days. Every now and again I try some experimental cookery. This is usually preceded by the discovery that I am missing some vital ingredient for the planned meal. Tonight's offering was a sort of Mediterranean chicken. Some chicken, onions, red peppers, skinned beef tomatoes, tomato puree, red wine vinegar, herbs de provence, muscovado sugar, baby plum tomatoes and chicken stock. Yes, 'some' is as technical as the measurements get. It went down rather well. 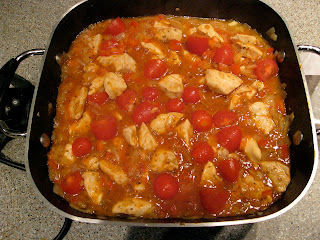 Give me a special occasion, a party, a bit of a do. The preparation and planning before hand, poring through recipe books to come up with a suitable menu, writing up lists of ingredients (or possible alternatives should they be unobtainable), trying out new dishes. That's the kind of cooking I get a kick out of. The day to day stuff? Well it has to be done, that's all.

You're lucky to have kids who eat carbohydrates , oh... and meat !

Carbohydrates, never a problem, but meat is becoming a bit iffy for one of them. Cheer up Alexis, their eating habits do change.

Ugh, the drudgery of having to think of something, every single day, to feed people who need you to ensure they won't come down with scurvy or rickets or some such thing! Especially when they're fussy. For years it seemed like the only thing Bob would eat was cheesy pasta and I was convinced he was going to die of some pre-scientific age disorder. It does get easier, but it's a long time coming.

I now give them what I can be bothered to. Last night it was Hummus (home made in seconds with a stick blender) with toast and salad.

I had a Good Housekeeping cook book, too, I think my mother gave it to me when S and I moved in together. It was great, though I still managed to make some monstrous suppers! And I have to confess, I weaned Bob on Heinz.

Looks good... (like your pan too - I have severe pan issues atm).

Did I already know that you have boy twins too? I am so scatter-brained I bet I said that before... My 2 are unutterably fussy & have turned cooking into a depressing experience. Good thing OH & I are such greedy things.

oh, this post made me hungry!! I am vegetarian, but this chicken dish looks delicious!

Eryl,
I just have to read through your blog to see that your kitchen and cooking are a major part of your life. I'm looking forward to the day when I can cook on my terms as you seem to.

veryberry,
If you're interested the pan is actually an electric frying pan and I seriously don't think I'd ever be without one now. I don't think you did know about the twins, I don't mention them as such very often, it's usually as 'the boys'. They didn't become fussy eaters until after they started school!

deb did it,
Thanks for visiting. Sometimes it's the food we don't or can't eat that look the most tempting. Story of our lives really : )

Ok, this is getting weird, this post could also be written by me, though I never cooked till my boys were born (now 7 and 9) and I taught myself from the baby and toddler meal planner too, it was a total lifesaver and I always give it to anyone who has a baby! I now cook everyday, I suppose I'm quite lucky as my boys will eat anything, but I do put that down to that book, they were eating curry and fish from 8/9 months. The MOST depressing part of the week though has to be the weeekly writing of the shopping list planning what to cook every night then trudging round morrisons with the inevitable trolley rage to then bring it home and find a place for it all - breifly. Homemade mackeral fishcakes and cous cous tonight, in fact, I better get started!

Bleah! the weekly shop! My sons like it when the fridge is dark, it means I've just shopped and the light is blocked by the quantity of food stuffed inside. It doesn't stay that way for long : )