Have you ever found yourself agreeing to do something or help someone and then thinking 'Why did I just agree to that?'.

I do it all the time. In fact I don't just agree, sometimes I even offer. When I appear with that rather puzzled look on my face the man of the house knows I'm asking myself the question.

"You've been wearing your 'I can do that' pants again haven't you" he says. I shrug my shoulders and smile sheepishly.

The thing is, it would be so much easier if I did indeed own a pair of pants that, when worn, prompted me to help people out. I'd keep them safely tucked in my underwear drawer and only wear them when there weren't a truck load of other things going on in my life.
Unfortunately there isn't. At least, there isn't only one. It would seem the office can be passed from one pair to the next, without any need for election and with alarming regularity, so I never know which ones they are. Subsequently whenever anyone asks 'Can you......?' my reply is in all probability going to be 'Sure, I can do that.' 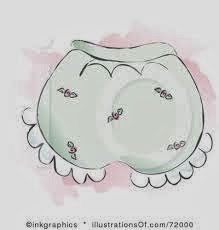 Which is why, at the beginning of September, when one of the local worthies (a woman without whose efforts Moffat would surely come to a standstill) asked if I would take part in this year's Christmas Craft Fair my response was 'Of course, I'd love to'.

When I got home the panic set in. What on earth had I been thinking? I had no stock! I hadn't made anything in months (Why? Probably my abundance of apathy and absence of ability!). What if my muses had packed their bags for good? How could I create without any creativity? What if ... *sharp intake of breath*... I couldn't 'make' anymore?

Fortunately, before I went too far on my self indulgent downward spiral, I checked in on some Blogs and was thrown a lifeline. The lovely Ali at Very Berry Handmade was hosting a textile ATC swap. Aha, the very thing! A small project to get me crafting again before launching myself into Christmas chaos. I signed up as quickly as I could, obviously still under the influence of those damn pants.

The theme Autumn was decided upon and I gathered a selection of fabrics, flosses, buttons, beads and bits'n'bobs. I discarded over half and settled on this little bundle. 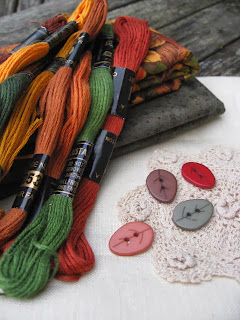 In choosing them I was only thinking of the theme and what colours it immediately brought to mind. I had no idea what I was going to do with them now that I'd narrowed them down. I also wasn't sure whether my fingers were going to behave themselves and allow me to do some sewing.
So for the next few weeks I played with a few designs in my head and folded a lot of origami cranes (I'd read somewhere it's very good for maintaining manual dexterity and hoped it would work for regaining it too). Searching for inspiration I found a small stamp of a bare tree I'd bought a number of years ago and used in an art project. I know it wasn't a very original take on Autumn but I decided to go with it. I also decided to hand sew the entire ATC (well...in for a penny and all that). 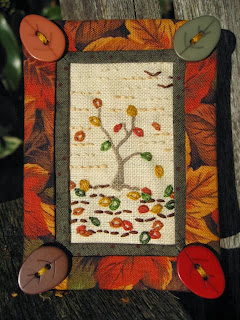 I hadn't actually intended adding the buttons but I think I may have been a bit optimistic with the whole hand sewing thing and felt the mitred corners didn't hold up to much scrutiny (just between you and me my embellishments often hide a multitude of sins). I've been looking at the other ATC's being swapped and can't help but be impressed by the sheer amount of creativity out there.
My swap arrived this morning, sent from Catherine, a very talented lady. 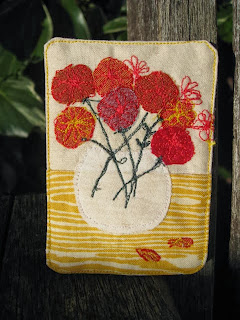 How lucky am I? Isn't it delightful? A mini masterpiece in textiles. It rather reminds me of Van Gogh's Sunflowers. Thanks so much Catherine, it truly is a little treasure.
And thanks for organising it all Ali. It's been great fun and definitely put me back on the crafting track. To paraphrase Gloria Swanson ( but hopefully less crazily )
"Alright bonny Moffat, I'm ready for my craft fair"

It's gorgeous Linnhe , I love all of it !
Your swap piece is very sweet , do you think you'll frame it ?
x

Love your autumn ATC Linnhe, great idea and lovely leaves (including the ones in the corners!)
Its great to find something that inspires and sets you back on the creative road again! Yippee for cyber-inspiration!
As for the pants - I seem to have a drawer full too - and you are so right - once you have worked out the pair to avoid the properties have transferred!! Perhaps theres some sort of shuffle function like on these new fangled music devices!
Wishing you all the best on your Christmas creativity and craftiness...hope your fingers get back into the rhythm!
I wonder how you are using all your cranes?
Ali x