A paler shade of white

Two and a half weeks back at school and I'm afraid it can be avoided no longer. The time has come. No more walking by at an accelerated rate. No more averting my eyes at the crucial moment.  After a cessation of almost 8 weeks, hostilities have been resumed. Once more I have to engage with  ...... (imagine the strings from 'Psycho' here) .....  the school shirts!!!! 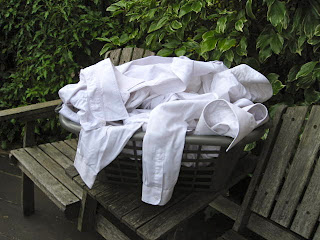 This is a war that has been waging from the moment the boys started school. In the beginning I had the upper hand. Admittedly that was down to the fact that I cheated slightly. I mean honestly, what mother in her right mind is going to stick with white polo shirts (White. On small boys. Seriously?), if after a little minor rule bending she can go with sky blue? (It looked better with the navy uniform too if you ask me.)

My complacency was short lived. Lines were redrawn the moment we moved from polo shirts to shirts and ties ( well that and the fact I can only flout rules for so long before guilt plays havoc with my conscience)

Since then it has been a constant battle between my desire to keep shirts white, and the shirts desire to revert to what I can only assume is their natural state - a shade most definitely not white.

So how do I beat the grime? Having opted for easy iron poly-cotton and as I'm trying to do my bit for the environment the good old fashioned boil wash is out of the question. Fortunately I have reservists on hand.

I think I have tried every stain remover ever marketed, even some  made from recipes found in books of household hints and tips , in a bid to be victorious  Yes, there have been a few casualties on the way. A handful of collars may have succumbed to an over zealous scrubbing (who knew necks could be so grubby?) and a number of small holes may have appeared when I left the paste on for too long (that recipe was never used again!) but most have come out of the skirmishes if not pristine at least intact. I would say at the moment the score is even.

So it is with a heavy heart I once more join the fray, armed with Ariel, a vanish bar and a packet of good old Dr Beckmann's Glo' White. Who, I wonder, will win this year? 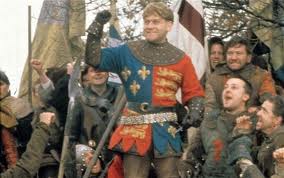 'Once more into the bleach, dear friend once more
or dose the wash up with the vanish fluid '

I hear you on this one! I suffered a whole childhood of white shirts turned every colour under the sun by a mother incapable of using a washing machine properly. I vowed I would never do the same to my children, but some how I suspect this will be yet another battle I will loose with spectacular results.

Oh I'm so glad I don't have that battle any more. I feel for you, I really do.
I hope don't lose your unique perspective on the matter!!
Teresa x

Glad to see you are armed with the neccesary implements of grime elimination! Hope you are winning the battle! With horror I realised that my son has been sporting the white with a splodge of red paint, (I hope!) that even bio won't shift, for several days...can't pass it off as a clean shirt with an exact same distribution of scarlet for more than one day!
Must remember Glo White inn teh next wash!
Ali x