I've been a bit lax with my blogging and blog reading these last few months. I do hope none of you lovely bloggers out there that I usually comment on have taken offence at my silence, it's nothing personal I assure you. It's just that I'm afraid life has intruded somewhat and I've found it difficult to concentrate. Some things take a bit of time to get your head around and don't leave room for much else.


However the other day I decided to go for a walk in the woods. I hadn't taken that particular path since Deefer, our beloved dog, left us 18 months ago. It was a bright Spring morning, one to be taken advantage of since they have been in short supply here since the season began. 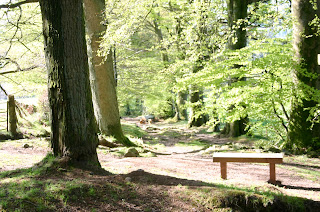 The ground was slightly moist underfoot and each step I took released the pungent odour of nurturing decay. I caught myself inhaling deeply and realised I had missed the smell. With every breath I could feel my heart lighten and a smile tug at my lips. The sun shone through acid green leaves, the undergrowth rustled with wildlife and lambs were making a rammy in the field beside me. And the turmoil in my head became calm.


No, I didn't have a miraculous revelation or some blinding flash of insight. I simply felt good. I passed a couple who were sharing a small picnic on a fallen log. We exchanged pleasantries, commented briefly on the weather, as you do, then I moved on. I smiled at them as I left, and I think it was my first genuine smile in almost three months.


I continued round Gallow Hill with a renewed spring in my step. Well I did until I stumbled, nearly fell, righted myself then looked around self consciously to make sure no one had witnessed my inelegant flailing of arms ( think 'windmill'). The journey was concluded at a more sedate pace. A spring in your step is all very good but only if it doesn't lead to a bruised derriere!


I arrived home with my head in a much better place than when I had left, much to the delight of the man of the house (he hates seeing me distressed, dislikes it even more when he can't fix things for me).

I've believed for some time that life doesn't throw anything at you that you are not equipped to deal with, I'd just forgotten that for a while. Time, I think, to get on with it :o)

Glad you are feeling happy again - sometimes the simplest things, like a walk, can make the biggest differences. Have a great weekend. x

There is nothing so good as a walk in the woods breathing fresh air and clearing out the cobwebs from your mind.

That's a lovely looking walk. Sometimes it's easy to get distracted and loose track of things online.

I've just read your previous post as well as this one and I can see why you needed some time to chill out and escape into the woods for a while.
I find walking can have a very calming effect. If it's not too cold and I'm on my own, I often go for a wander and sit on my favourite rock by the sea, away from everything and everyone. I just listen to the waves and the sea birds and watch the hypnotic movement of the water.
2012 has definitely been my 'annus horibilis' so far (it started with the fire and hasn't improved since then) - I'd blog about it but my blog isn't sufficiently anonymous for that!
So get along to the Spring Fling and immerse yourself in a day or two of pure unadulterated 'you' time :)
K x

Nature can have such positive affect on how we feel. It seems to ground us somehow and helps us see the bigger picture.
Glad you're coming out the other side.
Teresa x

It sounds like a good walk - I hope there have been lots more over the last few weeks.

Hello! I feel like that some times too, and it can take the smallest thing to cheer me up especially a fresh walk. Bx

Thank you everyone for your lovely comments. I do appreciate them all and promise to be a bit better at answering them all in future.