The festive spirit is at last sneaking it's way in to our home. Last weekend I persuaded the boys to brave the cold of the loft and help me bring down the Christmas decorations.
Dressing the house for Christmas has always been my job. I'm not sure if its because the rest of the household really isn't that interested or if they know how much pleasure it gives me and want to see me happy ( I'll give them the benefit of the doubt and go with the latter)
Although it took me slightly longer than usual ( I lost the impetus on Sunday and didn't get it back until Tuesday! ) The tree is now trimmed...... 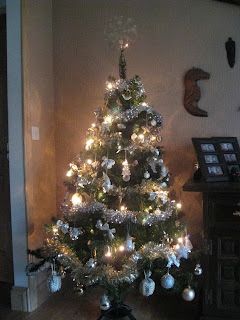 ...the wreath is at the door and the boys Santas are in their rightful place ( they made them when they were in nursery and are beginning to suffer slightly from the ravages of time). 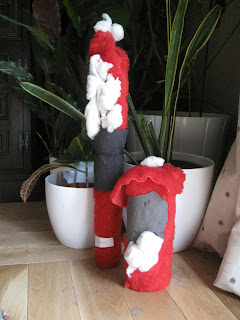 With that job done I should be feeling the warm glow of contentment. Instead I am gripped by a clammy claw of dread. The next task I have to face is one of my least favourite of the season. The writing of Christmas cards! 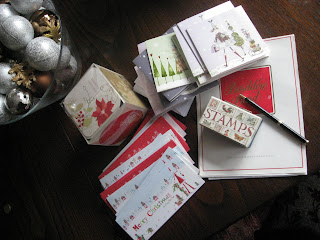 I spend almost as much time choosing them as I do Christmas presents, trying to marry up appropriate designs with the intended recipients. A lot of trouble for something that will be looked at briefly, put on display (something I've never managed to my satisfaction be they hung, strung or taped), then thrown out for recycling.

I hate to sound like a Scrooge but .... are they really necessary? I don't mean those that get sent to far flung friends and family ( you know, the ones with the accompanying letter filling everyone in on last years news), they are obviously a must. I mean the ones that get given to friends and neighbours. Surely if you see them often enough to hand deliver a card it would be just as easy to wish them a merry Christmas? It would be more sincere than some pre printed message signed underneath with what may or may not be your name, its difficult to tell by the fortieth card. And it could save a tree or two.

Ooh, I do sound a bit 'Bah, humbug' don't I? I don't mean it that way honestly. Let me explain. Due to the unsettling circumstances last year I struggled a bit to focus on the festive season, consequently I didn't get around to sending many cards. Strangely enough I didn't receive that many either. Now to me that seems to indicate card giving operates on a reciprocal basis, if you don't get you don't give!
I made sure that everyone I met in the weeks leading up to Christmas were wished the best of the season. Later on I wrote a cheque for the amount I would have spent on cards and stamps and popped it in to one of the numerous charity envelopes I had received through the post.

So now here I am with some cards spread in front of me wondering what to do. Do I go back to my card sending ways or do I continue with a new tradition, regardless of how inauspiciously it began,  keep the cards to a minimum and send the saving to charity? Is being struck off a Christmas card list really such a bad thing?

Have to say, I'd be happy never to see another Christmas card . . I hate the clutter . Doesn't mean I don't love Christmas though x

I whole heartedly agree with you, I dislike intently the sending of cards be it xmas or birthday! It is a token sentiment and a waste of money and trees and the printing inks polluting the rivers and seas, I don't think you are being bar humbug! Handmade cards - perfect or like you, the cards to immediate family with heartfelt messages yes, but I don't send cards to many people and also don't get many in return. This also applys to 'token presents too' by the way, neighbours and general friends, boxes of chocolates or smellies, I would rather the money to charity. It is the thought afterall that counts!!!

I have this debate every year: to send or not to send. Mostly I don't, and even when I buy the damn things I often forget to do anything with them. And I never know what to do with the ones I receive, they gather dust, fall over, generally look messy. And, let's face it, most of them are bloody hideous. But I am married to Mr Christmas, he loves them, so this year I relented and bought some. Most of them are still sitting here, packaged and unwritten.

I think lots of people are feeling the same way..the increasing cost of stamps is quite prohibitive for some, I keep intending to prune our list but can't bring myself to chop anyone off..I love receiving people's news and cards too which usually adorn the inside doors, however its another of the traditions that have fallen by the wayside this year.
I used to write a list then have a code for which card would be sent where etc. Now I just dive into a packet and wonder who would like one of these!!
A few years ago we did reduce our local list and we do give a donation to charity so I suppose we do a bit of both.
I'd like to think that people know you are thinking of them whether they have a card or not!
By now you will have resolved the dilemma!
Hope you have a Happy Christmas!!
Ali x

A few years ago our vicar started a scheme where we could give a donation to Shelterbox charity in lieu of cards and put up just one card for all our church friends on the church notice board. I tried it for a couple of years but the confused faces of the people I tried to explain it to were enough to set me back to giving to all. Now I give a donation and cards!!

So glad to hear that Eryl and Alexis. You won't be too bothered if you don't get one from me then :o)

You are so right Jane, it is indeed the thought that counts.

Such a shame it didn't take off Theresa, sounds like a great idea

I totally agree, I didn't send out as many this year, or receive as many, which made me think 'have they just been sending me a card out of guilt / habit all this time?' - it just confirmed any lack of meaning. I shall cut the list further next time!