If only it were tuppence a bag!

Ten years on and school mornings have become a kind of routine chaos. Each day I count down to the dawn chorus of "Mum, where's my.......?", the blank filled in by any number of mislaid items. The fact that I have been tidying away school books and paraphernalia, unceremoniously dumped the day before on the kitchen table, into the same wooden box for the last three years, or that blazers flung over the backs of chairs have been mysteriously making their way on to the coat rack for the same length of time, seems to have escaped their attention.
Then comes the inevitable argument over whose tie is lying beside the computer.
"It's mine, I took it off and left it there last night."
"No, you didn't. You put yours in your pocket on the way home yesterday. That tie is mine. "

And so it goes on until I remind them they only have 20 minutes left to cycle to school. There follows a mad rush to stuff packed lunches in to bags, grab a pair of matching gloves and depart with a hurried kiss and a door slammed closed so hard it shakes the room. Its at this point I have to dash from the back door to the front, waving the forgotten lunch/bike lock/helmet at them in the hope of attracting their attention before they get too far down the hill.

Is it any wonder I look forward to the next 10 minutes of peace and quiet with a steaming cup of coffee before starting in on the chores of the day?

Unfortunately, for the last few weeks that peace and quiet has been in short supply. No sooner have I taken my first sip of the reviving brew than the banging and scratching on the walls starts. Before you get the wrong idea and think I'm one of those people who complain about next door neighbours doing a bit of remodelling let me put your mind at ease. Firstly, since we've been guilty of a bit of remodelling in our time, and probably will be again, we would be ill advised to comment on any noise that accompanies such work. Secondly, we live in a detached house.

The problem is however noisy neighbours.....of the feathered variety! Our cedar shingle clad house would appear to be the perfect hibernation spot for local arachnids and as such provides a veritable smorgasbord for our feather friends. 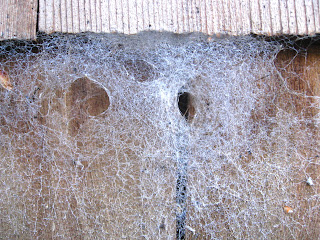 The scratching sounds are made as the birds try to get at the eight legged morsels, who are no doubt cowering ( I'm imagining six legs as arms wrapped around their heads with the other two legs knocking together at the knees) deep within the gaps where the shingles meet.

The banging comes from a slightly different source.

A rather scruffy, juvenile great tit has taken to head butting the windows. At first I thought it was perhaps reacting aggressively to its reflection, thinking it was another bird. But as the days went by I began to notice that it appeared at windows around the house, usually when we were in the room. Was it following us? It then became a regular at the kitchen window just before breakfast and roughly lunchtime. An idea began to form in my mind.

I don't generally feed the birds during the summer. I operate on the principal that there should be enough natural resources for them at that time of year. Besides which the profusion of plants provides way too much cover for any wandering cat that chooses to lie in wait under the feeders.
The last few weeks saw a dip in temperature and a couple of frosty mornings. Time for feeding season to begin. But I wasn't prepared. I had no fat balls, seeds or peanuts. The feeders remained empty. And that's when 'Wee Mental', as he has been nicknamed, started visiting.

Perhaps he is some sort of avian activist. After he has attracted our attention by butting the window a few times he usually flies off to some vantage point close by. There he sits and I am now imagining him tweeting "What do we want? Seeds! When do we want them? Now!" He is relentless (and definitely a candidate for any Alfred Hitchcock remake).

Anyway, feeling duly chastised I got some provisions. And none too soon it would seem. I filled the feeder just after the boys left for school. I heard some banging on the kitchen window just before 3 that afternoon and went through to investigate. Yup, there he was again, head butting away, drawing my attention once more to the feeder. This is all that was left. 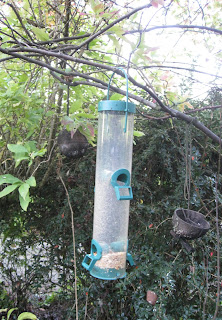 And that's not including the fat balls. All I can say is I'm hoping for a mild winter!

(I know this picture is out of focus but it seems 'Wee Mental' is camera shy and would disappear every time I tried to photograph him at the window. This is the best I could do. He is in the top left hand corner. He actually looks a bit like a blue tit in this shot but he does have a black strip down his middle and his cap is getting darker) 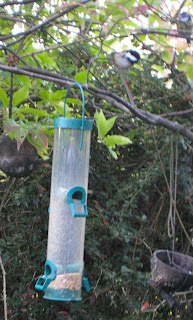 Those webs are amazing to look at, but I can see why you wouldn't want them all over your house.

Having just watched my almost 14 year old searching for her shoes in the midden that she calls a bedroom, I can totally relate to the morning mayhem you describe!

Responding in my 'relaxing after the frantic running around to get just one of us out of the house' time!
Those webs are rather magical - particularly as they are only visible to a few! We decided to feed the birds one year..put out 3 fat balls in a container hanging from a rotary washing line, after a few hours, on inspection there were large chunks missing. We set up a vigil and watched a grey squirrel perfect its upside down line walking technique, swinging upside down on the conatiner skills, and the final dramatic bringing the unit down to the floor manoeuvre. The fat balls then immedieately vanished..just like the entire sunflower head had earlier in the year! So unfortunately the poor Robins have to fend for themselves these days!
Can't leave without the corny comment .. wee mental's method of communication was obviously more effective than tweeting!!
Love your stories Linnhe!
Hope your noisy neighbours have subsided for today!
Ali x

'Routine chaos' is a great way of describing what goes on in households up and down the country in the mornings.
I'm afaid we vary rarely think about feeding the birds but they have a good feast off the windfall apples and remains of our veg garden at this time of year. I'm sure my auntie next door spends a fortune on them though - it seems to be full-time job.
Teresa x

As you know, mine are only 10 and 8 and the 10 year old is a NIGHTMARE in the mornings - I was hoping he was ging to grow out of it - thanks to your post I may have to introduce a nip of whiskey into my morning tea now...
We don't have bird feeders in our garden unfortunatly, we are surrounded by neighbours cats and as the only garden round here with a tiny patch of grass they frequent ours! Also we are patroled by seagulls being so close to the sea, not the ideal habitat for your little blue bird!