Last week saw the boys back at school, sent off with new uniform, schoolbags and the obligatory start of term pep talk. Whether they paid any attention to the "This is an important year" or the "You need to put a bit more effort in" and of course the ever popular "No more messing about, you need to stay focused" remains to be seen. But the desire to escape the lecture is a very effective way of getting them out the door on the first day back ( that and the appearance of the camera for the mandatory memento)

So off they trundled, keen to see their friends if not necessarily their classrooms. Eager minds, waiting to learn, consciously and unconsciously, whether they want to or not!

I might not have been making my way back to school but I learned a few lessons of my own last week. The first one being

I started on a brand new design 4 days before a weekend long craft fair. Crazy, I know, but Eryl had given me a tweed skirt in a wonderful combination of colours and it just so happened that I had some other fabrics that tied in with it perfectly.

And so I found myself on a bit of a learning curve. When I say curve, at the time it felt like a hair pin bend. A limited timescale along with a heavily napped cord and a check tweed that turned out to be warped ( if I followed the vertical the horizontal was squint and vice versa) made the whole process seem like the sewing equivalent of a lap around the Nurburgring. 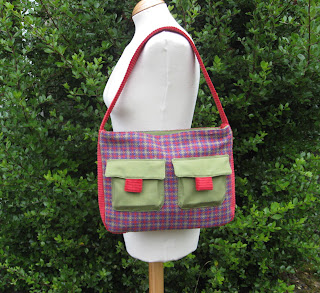 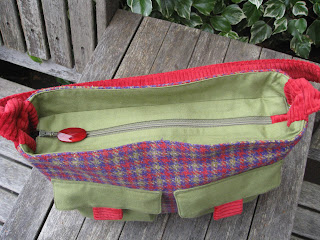 But I persevered, measured, remeasured, stitched, unpicked and stitched again. And in the process I learned my second lesson,

'Everything worth while requires a bit of effort' 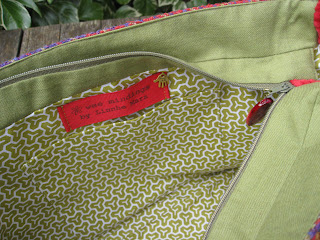 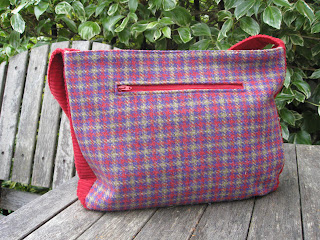 The process was made slightly easier with the help of my newest machine attachment. And thus my third lesson was learned. I started using an even feed foot a few months ago on the advice of the ever popular Lisa Lam. Up to that point I had been trying to adjust the feed of fabric manually ( I never actually got my fingers stuck in the machine but that was more a matter of good luck than good judgement)

It's a fantastic addition to my sewing machine and I can thoroughly recommend one. There is however one slight drawback. If I wanted to change the foot to, say, a zipper foot, instead of the unclip and clip that is usual with a Janome I had to unscrew the entire unit, and then screw on the appropriate one. Fiddly and time consuming. 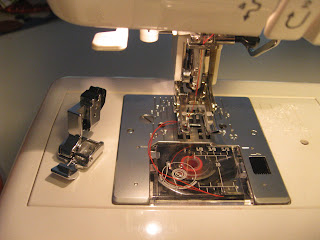 Being on that tight schedule I mentioned earlier I thought I would save time by setting up my old machine with a zipper foot and use it when required. Hmmm. 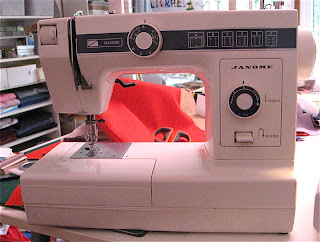 It seemed like a good idea at the time. I had failed to take in to consideration the differences between the two machines, and the fact that I had spent the last two years on the newer, programmable, more responsive version (it's by no means a top of the range machine but it's much more advanced than the one I had before) . 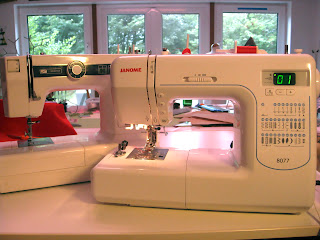 It was like having to drive a van after being in a Subaru! I spent more time unpicking seams than I would have unscrewing screws. The lesson?

'There are no short cuts'

So I may no longer be at the optimal age for learning, and most of my official education was forgotten as soon as it was written down on an exam paper, but each day that passes presents me with little reminders that there are still plenty of tricks for this old dog to learn.

The bag looks fantastic - I can't begin to imagine how complicated that was to make. Getting things done in the right order is always an issue for me and I'm far too impatient to tackle something that complex!

Hope it gets lots of use now that it's finished :)

I had a similar learning curve with my machine quilting, as you know! You must be so pleased you persevered. It's a lovely bag. Next time you try it'll be much easier (if you intend to make it again after all that).
Teresa x

I really admire your construction skill and your patience, I love the bag, the pockets are brilliant and that inlaid zip in the top looks so good, it was definately worth all the blood, sweat and tears!

Thank you so much Kate, Teresa and Jane, glad you all like the bag.I felt a bit like Robert the Bruce by the time I had finished :o)

Your bags are fab.. you give so much time and effort to each...perhaps they should be accompanied by their relevent blog post outlining their origin and process!
On your final para: RW junior keeps asking how I passed my exams as I seem to find answering some of his questions difficult now....!
Keep on learning those new tricks...my grandad used to say 'you learn something new everyday!'
Ali x