Soft sounds of movement come from deep within. Faint rustling while a body shifts and limbs extend. Muted rasps as the tingles of waking skin are relieved. A deep, sharp inhaled breath followed by a long, audible exhale. A stretch, a scratch, a yawn. Hibernation is over.

A lumbering form emerges from the opening , blinking in the vernal sun. Sniffing the air it steps into the light , shaking off any lingering languor. Definitely faster than a tortoise, hopefully less prickly than a hedgehog, probably not less hairy than a bear! (Okay that might be a bit of an exaggeration but surely I'm not the only one guilty of lapsing in the razor/waxing department during winter!)

Hello! I'm back. My self imposed ( but much needed ) hibernation is at an end. Since all other dormant species in my garden are making a comeback I figured it was time I made a move too. Green shoots are appearing everywhere and since, regardless of the snow and sub zero temperatures, the frogs have returned to the pond I consider it to officially be Spring ( even if I'm still wearing 3 layers of wool in attempt to keep warm). The lethargy of the winter months is slowly dissipating and I'm looking forward to creating. Yay!

Of course that would be a lot easier if my workroom hadn't been commandeered by the man of the house in my absence. When it became apparent that I wouldn't be able to gain access to my worktable without scaling a mountain of Bass cases, amps and guitar stands or navigating my way through a forest of wood I decided a tactical retreat was in order. I grabbed a box of scraps and retired to my favourite chair in front of the fire (yes I know its Spring but remember those temperatures I mentioned earlier?) and began to cut and fold. 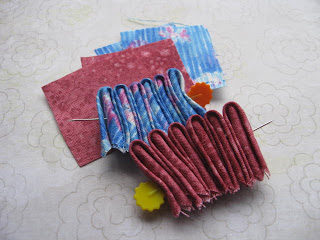 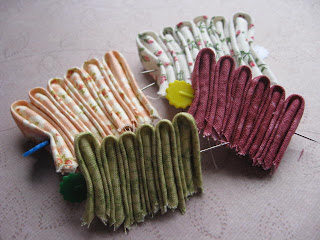 Each time I delved into the box I came up with another favourite fabric and possible colour combination. 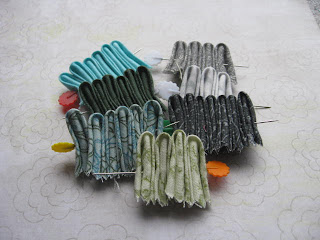 I played around with different shapes.... 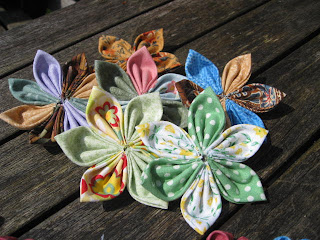 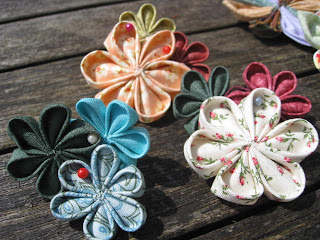 ...and all in all got a bit carried away. 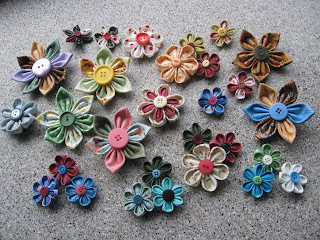 Now I just need to catch up on what everyone else has been doing. Blogland here I come!

Wayhey! So glad you are back with your beautiful words, colourful creations and additional thermal layer of unshavenness! Spring is trying its best to sprung!
Pleased you found a warm and comfy place to design and experiment...hope you can share your creative space or recolonise it over time.
Love your blooms - enjoy your meanderings around blogland!
Great to hear from you again!
Ali x

Lovely to see you back blogging. Your flowers are great - I particularly like the second rounded shape. What are you planning to do with them?
Teresa x