Sometimes a memory pounces on you with little or no provocation, like a frisky kitten after a short nap.


That was the snippet I overheard as I was walking past a gaggle of old dears the other day. And that's when the memory jumped me. I wasn't reminded of someone displaying false airs and graces, or even of a case when outward appearances had been deceptive. No. I was recalling a coat. A fur coat. My mothers knee length, mink coloured, musquash fur coat to be precise.


It was a luxurious coat, so thick and sleek it was impossible not to want to reach out and stroke it. I remember as a wee girl sneaking in to her room, opening the wardrobe, and burying my fingers deep into its silken pelts as I rubbed my face against it, back and forth, lost in its downy softness. Whenever she wore it I would get as close as possible, my face either nuzzling her sleeve or snuggling in to the skirts as we walked.


But probably the most vivid memory I have of that coat is like something from a Billy Connolly sketch. It was the 10th of December and we had just moved house, only to discover that the previous occupant had pocketed the money my mum had given them to buy enough coal to see us through the coming week ( our arrival fell in the middle of the delivery schedule). The house was freezing, being unheated for two weeks prior to our arrival. My sister and I were to share a room and we set about unpacking every bit of bedding we could find. We went to bed wearing our night wear as well as extra cardigans, jumpers and at least two pairs of socks. It wasn't enough. Out came the coats and they were added to the pile of duvets and blankets. Ahh! But who would get the fur coat? An argument ensued in the midst of which I pulled out the top trump of being the pitiful little sister ( well, all's fair in war and fur coat procurement!).Needless to say I fell asleep cooried under its comforting weight, feeling slightly guilty, but more importantly warm :o)


I'm afraid the coat spent most of its later life in a cupboard. It became very unacceptable to be seen wearing the fur of any animal, in some cases down right dangerous. Mum thought about a faux fur replacement but it wasn't the same. None she looked at were as soft, warm or inviting as the real deal. It was fur or nothing - she opted for nothing. That hasn't been the case for everyone though.


A couple of months ago I bought some velboa, a low pile faux fur fabric (try saying that when you've had a few!) that's meant to look like antelope hide. It's not a fabric that I usually go for but I wanted to try something a little different, and the antelope was the most subtle design I could find. Every handbag I have made from it so far has sold almost immediately. This is my latest one. 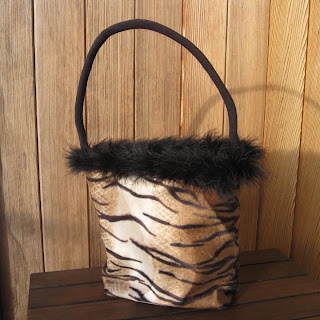 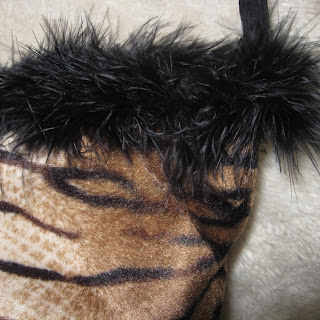 Faux fur definitely seems to have appeal. As far as I can tell you can get a fabric that replaces any kind of pelt or skin you can think of. Crocodile, snake, leopard and mink to name but a few. Even leather, suede and sheepskin have a fake alternative. It's quite obvious that we still love animal fur/skin (I think it must be primeval), but feel better about ourselves if we use a faux version.


And this is where I come to a moral crossroads.

It is indeed reprehensible to breed and farm animals solely for their pelts. Yet I eat meat, fish and poultry, also bred and farmed, and have no intention of becoming a vegetarian. What is the difference between skin and flesh, and why do I feel so different about them?


While I agree that keeping these animals in cramped cages is deplorable, freeing them in to the wild is not always the answer. Non indigenous species play havoc with the balance of nature.  We have, at times, had our fish pond raided by mink , no doubt  descendants of those released at some point by a well intentioned but misguided activist. Would it be deemed acceptable if they were housed in a more humane environment?

And what about all of those pelts that have already been used? I'll admit that I would love a vintage fur coat and occasionally have a look on line for one. Oh to be so warm and cosy! I like to justify that aspiration by saying that these animals were killed years ago, long before my time. I had nothing to do with it and don't condone any further killing.
Then again by wearing such a coat would I be saying I thought it was okay to wear fur, regardless of what age it was? Would I be guilty of perpetuating the desire for such products? But to my way of thinking even the use of faux fur panders to this desire. Should it be frowned upon too?

Just what is the problem with fur? Is its use vilified solely for humane reasons or does it smack slightly of the politics of envy?
So many questions! Which road do I take? And how can I be sure that the choice I make is because that's the path I want to travel down, not just the one it would be more politically correct to follow?

This debate rages in my head too. I suspect the problem we have, or I do, is killing animals for fur is selfish and vain, whereas killing them for food isn't. I know there are arguments that we don't need meat to survive, or even for optimum health. I've even heard some that say we are actually herbivores and eating meat is bad for us, but I'm yet to be convinced. So, if we needed to wear fur for survival it would be ok, but as we don't, not here at least, then it's not. That said, I do have a rabbit fur coat and it is the warmest thing to wear when it's minus whatever out there, and it often is.

See how confused I am?

Hi, I'm here from Eryls' blog. What a fascinating and beautifully written post. I think the issue you raise here about the tendency to scorn the wearing of real fur has much to do with its being seen as the prerogative of the rich - mink, pearls and diamonds - but maybe also the capture of endangered species in years gone by.

As you say, animals could be bred for fur but it's not valued, a bit like the way one of my daughters who will eat meat baulks at the idea of eating meat that comes in lumps, like a lump of steak.

It reminds her of bits of dead babies, she says. She goes berserk if she sees the head of a dead fish or duck. It's all to do with anthropomorphising the creatures I suspect.

We take the fur, and it's like robbing the creatures of their skin. We all need our skin.

I'm pleased to meet you.

Oh Eryl,
I'm so glad i'm not the only one. Leather and sheepskin seem so much more acceptable since we use the rest of the animal too. Perhaps if the little critters weren't so cute we wouldn't feel as bad?


Hi Elisabeth,
I'm so glad you dropped by and liked what you read. There are certain things I won't eat as they are too easily identifiable as a body part, so I can sympathise with your daughter. As a child I was just the perfect hight to be eye level with the ox tongues in the butchers widow. I never understood why anyone could eat something that might be tasting them back.