Sometimes in this multi media age of ours it would be so easy to become jaded and cynical about life, the universe and everything in general. To be inured to war and poverty by an unending flow of negative images. To read every word with a jaundiced eye, having been told so many lies before. To become a voyeur, the lives of people we neither know or care about spread out for our delectation, to feast on their fame or misfortune.

So when I helped out yesterday at the annual Fun Day in Moffat I can't begin to tell you how good it made me feel to see people enjoying the simple pleasure that was 'The Duck Race'. For those of you that don't know a duck race involves an abundance of individually numbered ducks, a stretch of flowing water and a finishing line. You put your name against a number and if that's the duck that crosses the line first, you win. It's as simple as that!


People both young and old picked their duck and then lined up patiently along the river, waiting to cheer them on. At 3 o'clock the ducks were released. 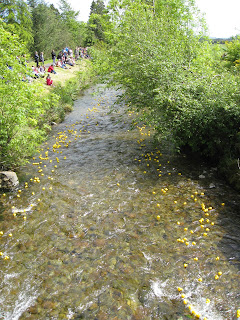 Did I point out these are plastic ducks? With no ability to paddle, fly, or respond in any way to the vocal encouragement of the crowd on the river bank. Did that stop the crowd from cheering them on? No it didn't.
And that's what gives me hope. It's not possible to feel world weary in the face of such optimism and enthusiasm. Disenchantment flows away with the current. Watching everyone smiling and laughing at something as unpretentious as a few plastic ducks left me feeling content and uplifted. 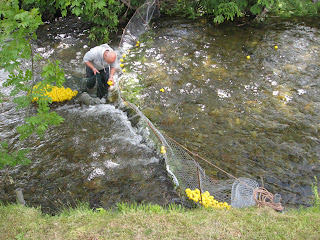 Although I'm not sure that's what Colin was feeling as he stood in the freezing water corralling the little yellow darlings!

What a wonderful read, you are so right too, you have to grab those small pleasures. And a duck race too, sounds fantasic!

Love it!! Keep looking out for the simple things!
Ali ;-)

The small things are the best things! Just getting out in the fresh air, and going for a walk makes me feel uplifted. Bx

Thanks for your comments girls. The simple things definitely make all the other stuff livable with.