I was asked recently to help out at a woman's group that is being set up here in Moffat. Alexis had been a demonstrator at the first one they trialled in early summer and she very kindly (?) suggested I may be able to run a practical session at the next one.  So on Thursday night, along with two other local women, we set up our respective workshops and waited, with a certain amount of trepidation on my part, for the women to arrive.
It was a well attended evening,quite surprising really considering the time of year and the fact that it had turned in to a lovely evening. We had all had quite a bit of input in to the event and as it was to be as 'hands on' as possible we had agreed on a range of activities that blended well together. There was the opportunity to express yourself through creative writing, led by Eryl. As well as individual pieces we were all encouraged to add a line of text to a long roll of paper that had been laid out on a table, very reminiscent of the 'he said she said ' game I used to play as a child. Alexis took a break from jewellery this time and instead demonstrated the making and embellishing of two different sizes of gift boxes, one of which was the correct size to house the decorated cupcakes that Danni was overseeing. My contribution to the evening was to encourage those attending to turn this..... 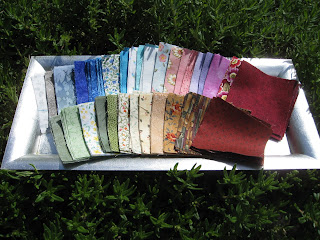 ....in to these. Fabric flowers that could be made into decorations, napkin rings or brooches. We all made brooches that night ( and luckily Alexis had a box the right size for them too, what were the chances! ) 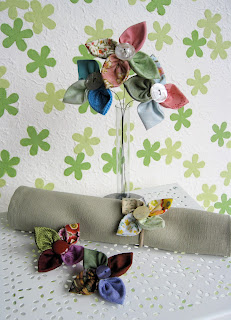 Everyone that attended that night left with some newly acquired skills, gained in the company of old and new friends, and a memento of the evening they had shared.
Sign me up for the next one, only this time I want to be doing not demonstrating!